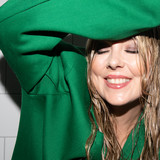 Her first album, Late Night Heartbroken Blues was released the same year as she posted her first songs on Myspace, and the single Oh Boy was on the singles charts for eight weeks. During the following years, she managed to release no less than six albums, win a Swedish Grammy Award for the duet Om du lämnade mig nu, with Lars Winnerbäck. Even if the pause was much needed, it didn’t mean that Miss Li sat idle. The song-writing team, Miss Li and partner Sonny Gustafsson wrote songs for Swedish as well as international artists. They soon got songs placed with US-upcoming star Phoebe Ryan. Following that, they were invited to go to Los Angeles to write songs for Rihanna’s up-coming album with her dedicated team. Rihanna’s production team are in to a lot of trap and urban-oriented music, which is pretty far

from what I’ve been doing previously, but obviously the two worlds fit together seamlessly. Just to sit there with some of the world’s best writers opened my eyes to the fact that there are no limits, says Miss Li. For me, this isn’t light years away from what I used to do. Perhaps the new parts are the island and reggae influences, and that we’ve incorporated programmed parts and a really heavy bass. The playfulness is still there though, and the loud drums, she says.