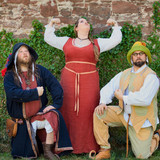 Heiter bis Folkig - the name says it all. Since the end of 2004, the musicians have been providing fun, humour and dancing moods at medieval fairs, concerts, festivals, banquets, private parties, live role plays and many other events. A colourful mixture of medieval music, Celtic folk and more is presented, in which well-known popular songs alternate skilfully with atmospheric original compositions. Over the years the group has gained a great reputation and has performed at many small and large events at home and abroad, such as the Mittelalterlich Phantasie Spectaculum, the Festival Mediaval, the Folk im Schlosshof Festival, the Feuertanz Festival or the Medieval Spectacle in the Angelbach Valley. As one can already guess from the name of the group "Heiter to Folkig", the musical performances of the band are framed by all sorts of funny remarks, the involvement of the audience and a good portion of nonsense, so that no eye remains dry and no laughing muscle is unused. In addition to a wonderfully versatile and instrumental fullness of sound with countless instruments from the medieval and folk genres, Heiter bis Folkig impress with up to five-part vocal movements and a uniquely varied programme. From cheerful drinking songs to swinging and inviting catchy tunes to sad ballads or a cappella numbers with a goose bump guarantee, the programme of Heiter bis Folkig never gets boring.