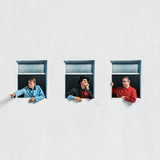 Newcastle's angular pop quintet Maxïmo Park consist of singer Paul Smith, guitarist Duncan Lloyd, bassist Archie Tiku, keyboardist Lukas Wooller, and drummer Tom English. Like their friends and neighbors the Futureheads and Field Music, Maxïmo Park craft smart, sharply catchy songs inspired by post-punk and new wave legends like the Jam, XTC, Wire, and the Smiths. Lloyd, Tiku, Wooller, and English formed the band as an avant rock, largely instrumental group, taking their name from a meeting place in Cuba for communists. Smith had previously played with the band Me and the Twins and was recommended as the band's new singer by English's girlfriend, who heard him singing Stevie Wonder's "Superstitious" at a karaoke night. Maxïmo Park issued their debut 7", The Coast Is Always Changing/The Night I Lost My Head, in 2004; it caught the ears of Warp Records, which despite being a mostly electronic label signed them and released their second single, "Apply Some Pressure," early in 2005. It made the Top 20 in the U.K.'s national charts. At that time, Warp also released the Apply Some Pressure EP, which featured tracks from both of the band's singles, in the U.S. Maxïmo Park also finished recording their debut album with producer Paul Epworth (who also worked with Bloc Party and Babyshambles) that winter and spent the spring touring the U.K., Japan, and the U.S., making an appearance at South by Southwest. The "Graffiti" single heralded the arrival of the band's full-length debut, A Certain Trigger, late that spring. More tours of the U.S. and U.K., including gigs at Glastonbury and Reading, kept the band busy that summer. Early in 2006, the B-sides collection Missing Songs was released; Maxïmo Park also maintained their hectic touring schedule and returned to the studio late that year, teaming with producer Gil Norton. Our Earthly Pleasures arrived in spring 2007. For 2009's Quicken the Heart, Maxïmo Park ventured to Los Angeles to record with producer Nick Launay, who gave the songs a slightly rawer yet still danceable sound. In 2010, the band took a break from its near-constant recording and touring, during which time Smith made the solo album Margins. The band's hiatus continued until 2012, when Maxïmo Park resurfaced with The National Health, a harder-hitting, politicized effort produced by Gil Norton. For 2014's more intimate, electronic-driven Too Much Information, the band recruited the Invisible's Dave Okumu and Field Music's David and Peter Brewis as collaborators. After Smith worked with the Brewis brothers on a pair of solo albums (2014's Frozen by Sight and the following year's Contradictions), Maxïmo Park returned in 2017 with Risk to Exist. Recorded at Wilco's Loft studio in Chicago and featuring backing vocals from Low's Mimi Parker, the band's sixth album reflected the turbulent times in which it was recorded. Ahead of the album's April release, the album's title track was released as a single that benefitted the refugee charity Migrant Offshore Aid Station (MOAS). ~ Heather Phares, Rovi