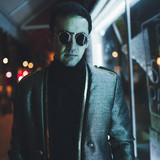 Driven by an uncommon and practical work ethic that comes from being born and raised on his family’s cattle ranch in Colorado, Landon Williams has been a long time coming. His pop music is studded with substance, complimented by evocative and inventive visuals. Williams, now based in LA, has quickly positioned himself in the circles of multi-platinum producers Dan Book (Selena Gomez, Tiesto, Zedd) and PJ Bianco (Nick Jonas, Demi Lovato, Fifth Harmony).   A perfect combination of old school organic influences and contemporary vibes, Landon counts Bruce Springsteen, Fleetwood Mac, and Justin Timberlake as chief inspirations. The singer-songwriter/producer’s songs are blanketed with sensualized vocals that ride over booming bass sounds and intricate guitar parts he weaves in.   Dropping out of Colorado State University after a year – entirely because of his plans to make a career out of music and not waste any more time – Williams became a guitar tech and road manager for country music great Michael Martin

Murphey. Through this he learned every facet of touring and all the behind the scenes elements that come with mid-tier stardom.   In 2016 he performed 175 shows with his band, subsequently going on a recording/writing hiatus. Williams was championed by Trap Nation and Lowly Palace in March 2018. Together they release his anticipated single “All Day All Night” on May 4.