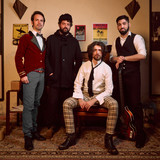 It was a casual meeting that took place among the members of the fantastic circus of rock 'n' roll most unleashed in Italy Although the band owes its name to a show organized by the legendary Rolling Stones in the late '60s, we can still consider, given the variety and the charisma of the musicians, that just a circus is. Their repertoire, which starts from the blues of Chicago until it ends with the wildest rock'n'roll (touching some country sounds), is something truly unique. No performance of the Rock'n'Roll Circus is the same as the previous ones, creating a continuation of more and more numerous and amused people. Attending one of their concerts, letting yourself be carried away by the wildest rock 'n' roll for at least 2 hours, satisfies the heart and the spirit (and of course keeps the most willing dancers in shape). Their musical adventure continues today, and the Rock'n'Roll Circus are ready and determined to continue to spread the word of "healthy rock'n'roll to drink and dance" 2021 marks the release of Reelin' and Rollin', their debut album recorded entirely in analogue on tape, which collects the legacy of the great masters of the past and the influences that characterize the sound of the band.