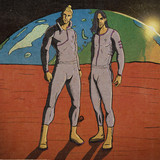 Shape of Water is an alternative art-rock band formed in 2018 from Manchester, United Kingdom. The band's music has no boundaries and is sure to redefine rock music as you know it. Rox Capriotti and Luca De Falco met in 2004 in San Benedetto del Tronto, Italy and formed The Lotus. In 2015, the band relocated to Manchester, UK and after a short hiatus period they decided to split up. After the breakup of The Lotus, Rox and Luca decided to move ahead once again, on their own together and thus gave birth to Shape of Water. After writing dozens of songs, they started recording new material in early 2018 with producer Paul Reeve (Muse) and also brought on Sky Van Hoff (Rammstein) to mix the songs "Scar" and "Not All the Things". The result was a ten-song album entitled Great Illusions. The album deals mainly with the misconception of human feelings, politics, and society. Great Illusions was released in the Summer of 2020 and received critical acclaim from dozens of respected media outlets. The band was unable to promote it live due to the ongoing Covid-19 pandemic however, the duo was able to quickly adapt with the use of live-streaming performances which were widely received. Shape Of Water also spent time “reinventing” some of their songs for an early 2021 EP release entitled Lockdown On Mars. The EP is an exciting cinematic rebirth of electro art-rock that you need to hear to believe! Lockdown On Mars was released worldwide on February 12, 2021.