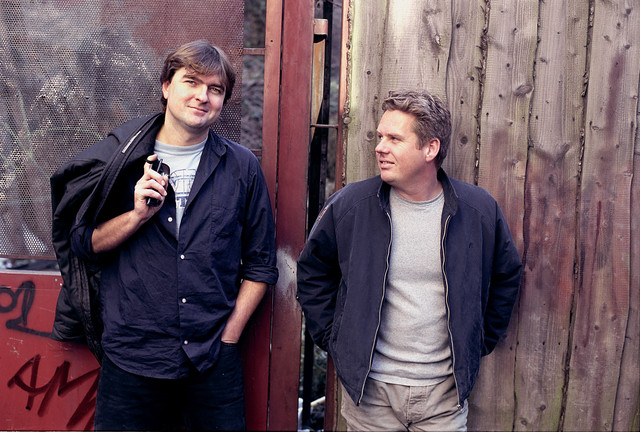 With their two distinct lead vocals, harmony singing, and mixture of pop music and cabaret lyrics, Acda en De Munnik became the surprise success of the late 1990s and early 2000s. Although originally a theater act, the duo secured one super hit in the summer of 1998, and enjoyed a spin-off of that success well into the new millennium. Thomas Acda (b. March 6, 1967) and Paul de Munnik (b. September 30, 1970) met in 1989, while studying at De Kleinkunstacademie, an art school in Amsterdam, where they were tutored by the likes of Bram Vermeulen and Huub van der Lubbe. The two began making music together in the basement of the building, and ended up composing their final project together in 1993. Although that show won a prize for upcoming talent, both went their separate ways: Acda as a TV actor and presenter (he was a team captain on the Dutch version of Have I Got News for You), and De Munnik as a theater actor and drama teacher. In 1995, Acda en De Munnik got together again, to make their fist theater program. The show was a mixture of cabaret and pop music. Their songs proved to be a great success, and many times they were asked to release an album. Spurred by these requests, the band recorded their debut album at the end of 1996, releasing it early the next year. The record, simply entitled Acda en De Munnik, was a typical cabaret record, with the obligatory Jacques Brel cover and thoughtful, reflective lyrics by both authors. The main difference with most cabaret records, however, was the music: apart from traces of Tom Waits, there was also an indebtedness to the music of the Beatles and even Counting Crows to be found, and the songs worked on their own, even when taken out of the content of the program from which they sprang. When the record was re-released in the fall of 1996, it spawned some singles, although none of them became a hit. Their breakthrough came in the summer of 1998, with the release of single "Niet of Nooit Geweest" -- a full band record. Although not available on that album, it sent Acda en De Munnik to the top of the charts -- the single itself became their ticket to success and stardom. It was the summer hit of the year and made Acda en de Munnik a household name in Dutch pop music. Acda en De Munnik's successor, Naar Huis, released in the fall, became a double-platinum record, and the coinciding theater show was sold out around the country. Next single "Het Regent Zonnestralen," released in 1999, failed to repeat the commercial success of its predecessor, but did secure critical acclaim: Acda en De Munnik won two Edison Awards: one in the category of cabaret, and one in pop music. In the summer of 1999, the band joined forces with befriended band Van Dik Hout, to record smash singles "Mijn Houten Hart" and "Zij Maakt Het Verschil." In September, the live record Op Voorraad appeared, a collection of songs written for their two theater shows. After that, their third studio album, Hier Zijn, appeared in the fall of 2000, with songs culled from their latest theater show: Deel III. In 2001, Acda en De Munnik issued another live album, Live Met Het Metropole Orkest, recorded with the Metropole Orchestra. Acda en De Munnik's fourth studio album, Groeten Uit Maaiveld, appeared in 2002. It was their first album with songs that weren't written for a theater show. Nonetheless, it became a big success, selling over 40,000 copies in the first week. In 2003, the band returned with a theater show and another collaboration with Van Dik Hout: the studio album The Best of the Poemas. They also won a Golden Harp award. In 2004, the duo got together with theater director Ruut Weissman to write "rock-comedy" Ren Lenny Ren!. The leading star was actress Carice van Houten. Very different than their precious theater shows, Ren Lenny Ren! was a highly ambitious project. However, the musical proved to be both a commercial and critical flop. Sessions with producer JB Meyers brought forth the corresponding album Liedjes Van Lenny. The next year saw the release of the best-of Adem, with four new songs. After that, the duo took a two-year break, and returned in 2007 with Nachtmuziek, an album full of small, domestic songs. It did fairly well on the chars, but failed to return Acda en De Munnik to the success of 1998-2003. ~ Philip D. Huff, Rovi