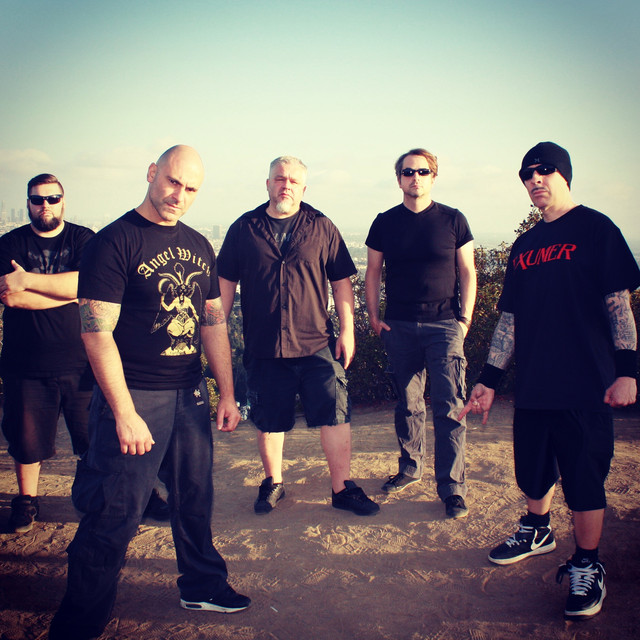 Conceived in 1986, Exumer are a German thrash metal band with close ties to Angel Dust (their labelmates on the Desaster imprint) and offered a raw, vicious, unsophisticated style derived chiefly from influences like Venom, Exodus, and Slayer. Their extremely aggressive brand of thrash metal has been immortalized on the albums Possessed by Fire (1986) and Rising from the Sea (1987), both considered among the finest and most extreme thrash metal sets ever to come out of Germany. Though they record and tour infrequently, with several breakups and a large revolving-door cast, the collective (vocalist Mem V. Stein and guitarist Ray Mensh are the only constants) have managed to issue many albums and a handful of demos since their inception. After their second album, the band split but reunited for a performance at Wacken Open Air in 2001, then walked away again until 2008. In 2009 they enlisted bassist T. Schiavo for the Waking the Fire demo and played the Los Angeles' Thrasho de Mayo Festival. In 2010 they recruited drummer Matthias Kassner. After 25 years, Exumer signed to Metal Blade and released its long-awaited third album Fire & Damnation in 2012. (It also included guitarist H.K., who passed away in 2014.) Produced by Waldemar Sorychta (Grip Inc.), the set was greeted with enthusiasm by the metal community. After touring and a period of rest, the band reconnected for 2016's The Raging Tides featuring guitarist Marc Bräutigam. Vocalist/bassist Mem von Stein and guitarist Ray Mensh were said to have met at a Frankfurt Slayer show, subsequently drafting second guitarist Bernie and drummer Syke Bornetto to complete the lineup responsible for 1986's bruising Possessed by Fire debut -- an enduring underground favorite despite stiff competition from more successful Teutonic thrashworks of the day by Kreator, Sodom, and Destruction. Sadly, Exumer returned significantly less inspired (and minus von Stein, who was briefly replaced by Paul Arakari) for 1988's sophomore slump, Rising from the Sea, and broke up a short time thereafter. Exumer's "classic" lineup did eventually reunite for a special performance at 2001's Wacken Open Air Festival before disappearing once again. In 2009, von Stein and Mensh relaunched the band with a new lineup, delivering a lone single called "Walking the Fire" that same year. A deal was eventually struck with Metal Blade, and 25 years after the release of their previous LP, Exumer delivered their third album, 2012's Fire & Damnation. Reinvigorated and heavy as ever, they continued to tour, eventually releasing a follow-up album called The Raging Tides in early 2016, which was regarded in the metal press as "violent, speed-obsessed Teutonic thrash." After a world tour, playing festivals, and individual gigs, the band took a short break and re-teamed with Sorychta for 2019's Hostile Defiance. ~ Eduardo Rivadavia, Rovi