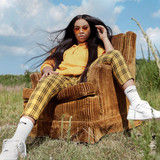 A singer blessed with a soulful, highly resonant timbre, Koryn Hawthorne is best known as a contestant on season eight of NBC's The Voice. A native of Abbeville, Louisiana, Hawthorne is the daughter of a minister and was first introduced to music while singing in church. During high school, Hawthorne sang locally at festivals, nursing homes, and charity events. In 2015, though only 16 years old, she was accepted onto the NBC reality vocal competition The Voice with her rendition of Emeli Sandé's "My Kind of Love." Initially picked as a member of judge Christina Aguilera's team, Hawthorne was eventually "stolen" by judge Pharrell Williams. During her time on the show, Hawthorne received mentoring from guest Gwen Stefani and made it past the Top Ten with her rendition of Ed Sheeran's "Make It Rain," which debuted at number three on the iTunes songs chart the week of her performance. In 2016, Hawthorne signed a management deal with Maximum Artist Group and recorded the theme song for the Bounce TV series Saints & Sinners. She released an eponymous debut EP the following year. In 2018, she returned with her full-length debut album, Unstoppable, which topped Billboard's Top Gospel Albums chart and earned Hawthorne a Grammy Award nomination for her song "Won't He Do It." She landed another hit in 2020 with "Pray," the lead single from her second album. ~ Matt Collar, Rovi