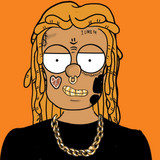 Michael James, known professionally as Hey Mikey!, was born on Jan 24 in Broward County, Florida. His birth mother was addicted to Heroin supplied to her by his birth father. During a raid of their home one evening, both were taken into custody and Michael was placed into the CPS custody. He remained in group homes for his entire childhood, as his rambunctious nature did not make him a suitable candidate for adoption. Michael would later channel these feelings of loneliness and despair into his music. During his time in foster care, Michael’s only escape was through music. He idolized rappers such as, Soulja Boy, Lil Wayne, Drake, Future, and Waka Flocka Flame. These rappers showed him the lifestyle that he wanted and he knew a music career was the only way to obtain it. He began writing lyrics in his bunk bed at 13 years old. In high school he met his best friend Anthony Joseph and began using the studio Anthony’s father had set up to record songs. This would often include late night sessions after Anthony’s father had gone to sleep using beats that were leftover or going to be used by Anthony’s father later. At 15 years old, he released a series of singles around his high school to rave reviews. His first single, So Fresh, landed in the hands of a major label executive who reached out to Michael, now performing under the stage name Hey Mikey! and invited him out to California to begin working on his debut album.