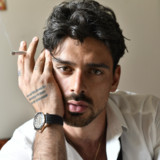 Love is one of the last unsolved riddles, always confronting us with new questions. It’s an eternal mystery that Michele Morrone is also attempting to get to the bottom of. Be it in his leading role in Netflix ratings hit “365 Days”, or as an internationally renowned singer and musician, as the multitalented Italian demonstrated to impressive effect last year on his highly-acclaimed debut album “Dark Room”. With “Beautiful”, Morrone is now releasing the lead single from his anxiously-awaited second album.   “Whether you are ready for love or not,” says Michele Morrone of the idea behind his brand new single “Beautiful’. “Whether it’s the right time or not, love always feels right and it will hunt you until you submit to it.” And this is a man who knows what he’s talking about: Growing up in a small dreamy town near Milan, the 30-year-old is now based in beautiful Rome; the “Eternal City” where romanza and amore are literally in the air.   With “Beautiful”, Michele Morrone is releasing a passionate tribute to what is probably the strongest human emotion, one that’s almost irresistible. Enjoy melting away to this one!