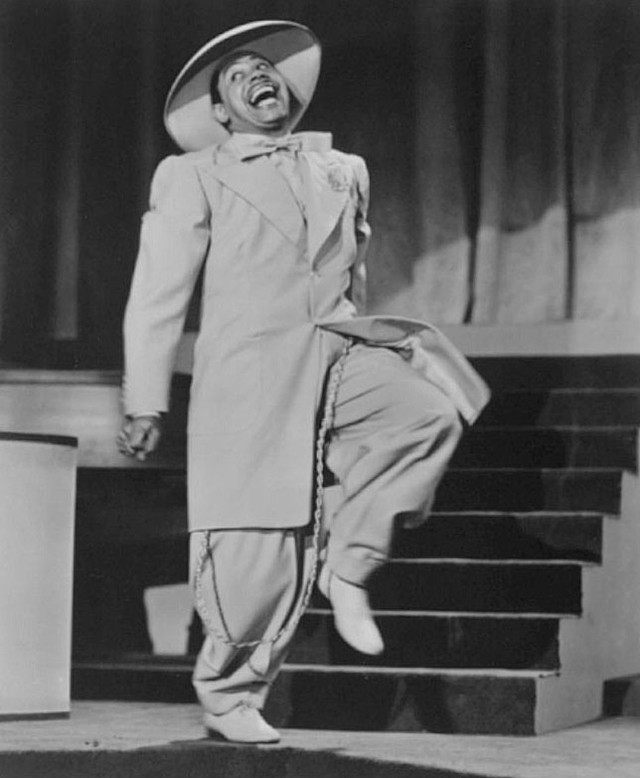 One of the great entertainers, Cab Calloway was a household name by 1932, and never really declined in fame. A talented jazz singer and a superior scatter, Calloway's gyrations and showmanship on-stage at the Cotton Club sometimes overshadowed the quality of his always excellent bands. The younger brother of singer Blanche Calloway (who made some fine records before retiring in the mid-'30s), Cab grew up in Baltimore, attended law school briefly, and then quit to try to make it as a singer and a dancer. For a time, he headed the Alabamians, but the band was not strong enough to make it in New York. The Missourians, an excellent group that had previously recorded heated instrumentals but had fallen upon hard times, worked out much better. Calloway worked in the 1929 revue Hot Chocolates, started recording in 1930, and in 1931 hit it big with both "Minnie the Moocher" and his regular engagement at the Cotton Club. Calloway was soon (along with Bill Robinson, Ethel Waters, Louis Armstrong, and Duke Ellington) the best-known black entertainer of the era. He appeared in quite a few movies (including 1943's Stormy Weather), and "Minnie the Moocher" was followed by such recordings as "Kicking the Gong Around," "Reefer Man," "Minnie the Moocher's Wedding Day," "You Gotta Hi-De-Ho," "The Hi-De-Ho Miracle Man," and even "Mister Paganini, Swing for Minnie." Among Calloway's sidemen through the years (who received among the highest salaries in the business) were Walter "Foots" Thomas, Bennie Payne, Doc Cheatham, Eddie Barefield, Shad Collins, Cozy Cole, Danny Barker, Milt Hinton, Mario Bauza, Chu Berry, Dizzy Gillespie, Jonah Jones, Tyree Glenn, Panama Francis, and Ike Quebec. His 1942 recording of "Blues in the Night" was a big hit. With the end of the big band era, Calloway had to reluctantly break up his orchestra in 1948, although he continued to perform with his Cab Jivers. Since George Gershwin had originally modeled the character Sportin' Life in Porgy and Bess after Calloway, it was fitting that Cab got to play him in a 1950s version. Throughout the rest of his career, Calloway made special appearances for fans who never tired of hearing him sing "Minnie the Moocher." ~ Scott Yanow