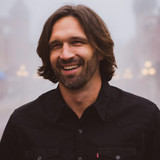 Born in England, raised in Australia, now living in the Black Hills of South Dakota, USA. Richard Grewar's blend of rock, pop & acoustic elements ignite the creation of a soundscape bursting with color, rhythm & mood-altering intensity. Live, Grewar serves up a melting pot of looped acoustic overlays; delivered in real-time. Since relocating to the USA in 2013, Richard has had the honor of being the first ever performer at the Life Is Beautiful Festival featuring headliners The Killers, Kings Of Leon and Imagine Dragons, as well as showcasing alongside White Sea (Morgan Kibby of M83) at the South By Southwest spin-off, SXSWV2V & opening for Le Butcherettes at the Neon Reverb Festival in Las Vegas. Throughout his career Richard has also shared the stage with: Tegan & Sara, Rai Thistlethwayte, The Veronicas, Evermore, Magic Dirt, The Delta Riggs, Matthew Logan Vasquez, sELF (Matt Mahaffey), Sego, Gold & Youth and others. Life has a way of pulling you back towards your passion, and after nearly three years away from music, almost six years since the release of his debut album, “Ghosts”, Richard’s second album "Cold Feet" was released in 2017. New single “Holland”, which addresses Grewar & his wife’s recent experience with miscarriage, is released everywhere on April 19th, 2019. "phenomenally catchy" REVERB MAGAZINE / "a distinctive voice" RAVE MAGAZINE / "chiming acoustic music that stands out from the pack" LAS VEGAS WEEKLY / "a masterpiece" THE AU REVIEW