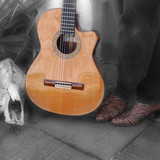 As a Guitar Player, Chris has performed with Bootsy Collins, hit song-writer, Anthony Smith, and jammed with Lita Ford. He can play a very wide range of styles ranging from Rock, Pop, Modern Country, Metal, Flamenco, Gypsy, Celtic, and other World/Ethnic styles. He is versed in both electric and acoustic and is very much at home with a pick or fingerstyle. As a Performing Artist, Chris has 3 solo CDs out on his own label, Baroquen Records and performs solo instrumentally, in duo’s with vocalists, and whatever band projects he’s involved with.

As a solo artist Chris performs at festivals, private parties/events, restaurants, house concerts, and workshops. He has performed for The Federal Bar Association, The EPA, and twice at an International guitar festival in Zihuatanejo, Mexico where he was among 22 artists chosen out of over 250. As a Composer, Chris has had numerous songs in film & T.V. (America’s Got Talent, Let’s Make A Deal, Beach Patrol, Nitro Circus, MTV, Clean House, Amexicano and others). He also has 2 solo CDs out of Flamenco-based World Fusion, “El Samuraichi” & “Higher Glyphics” as well as a live CD that has original songs and covers that range from Eiffel 65 to Metallica. Since relocating to Nashville in 2008 Chris has also played guitar for various touring acts, hit song writers, and a 3-time Grammy winner