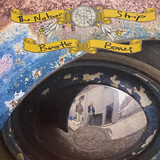 It's been called "smart, literate, super catchy pop/rock'n'roll?". Now there are 3 albums and an EP worth of the good stuff. Songs, records, (actual records), gigs, all the good stuff. John Encarnacao – vocals, guitars Pete Marley – the bass guitar, guitars, vocals Matt Langley – keyboards, guitar, vocals Jess Ciampa – drums, percussions, vocals "The Nature Strip are from Sydney. Not that you'd know that, because they sound so English. They cite their influences as XTC and Talking Heads and you can hear glimpses of both. XTC's harmony and wit, Talking Heads turn of phrase." The Nature Strip began accidentally at a

songwriting session between long-time musical buddies John and Pete. They’d played together in Sydney band the Flies waaaaay back, and also in John’s outfit Warmer from 2002 for a good few years and three albums. In 2009, Pete had a couple of tunes he couldn’t finish, went around to John’s house and they knocked them off over a bottle of red (or was it cups of tea?, can't remember). John had