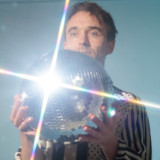 On his second solo album as Tōth, You And Me And Everything, Rubblebucket cofounder Alex Toth embarks on a journey of transformation and self-discovery. Surrounded by cascading folk rock, celebratory horns, and jaunty piano, he finds himself falling in love after the dissolution of a 12-year-long relationship and learning how to deal with deep-seated grief. From the “why not?” attitude that drives the celebratory “I Might Be” to the vivid imagery that positions “Turnaround (Cocaine Song)” as one of his strongest lyrical efforts yet, Tōth uses his latest album to push himself as both a musician and a person. Mixed by Grammy-winning producer Noah Georgeson (Joanna Newsom, Devendra Banhart, Cate Le Bon), the album brings to mind the heartfelt vulnerability of Arthur Russell, the woozy jazz of Chet Baker, and the playful melodic breadth of the Beach Boys. The only thing we know for sure about love is that it’s an adventure. On You And Me And Everything, Tōth comes to terms with that truth and invites you to join him on the unpredictable, fulfilling ride.