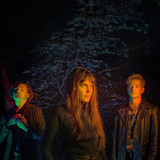 Manchester-based trio Calva Louise's new conceptual album 'EUPHORIC' will be released on digital platforms on August 20th through the Label FRKST/300 Ent, along with a Limited Edition 12” coloured Vinyl via Blood Records and an animated movie created, produced and directed by Mescalitas. EUPHORIC is a celebration of the band’s multicultural identity, explains songwriter, vocalist & guitarist Jess, who is strongly influenced by Latin Rock as well as British and American bands. The lyrics detail episodes of the dreamer’s experiences as an inner conversation with his other self, the counterpart of the human being. It is a story about the duality of the human being and about the different perceptions of reality. Their eclectic sound is a molotov cocktail, encompassing ambitious songwriting and searing guitar hooks. Jess, Alizon and Ben crossed paths in London during 2016, forming the band and quickly supporting the likes of Highly Suspect, Albert Hammond Jr. and Razorlight on tour. Since the band started, Calva Louise's songs have found heavy rotation across BBC1 with Jack Saunders, Huw Stephens, Annie Mac and Abbie McCarthy, BBC6 Music with Lauren Laverne, Steve Lamacq, Shaun Keaveny and the legendary Iggy Pop, X-posure with John Kennedy, as well as a live session at BBC Maida Vale Studios. There's more than music underneath Calva Louise's songs, so follow this link to get one of these exclusive edition Vinyl while stocks last! https://blood-records.co.uk/products/CalvaLouise