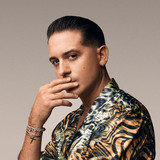 With his slicked-back hair and leather jacket, G-Eazy was known as "the James Dean of rap" when he debuted in the late 2000s. Armed with bars that detailed hedonistic excess and conflicted inner turmoil, he steadily climbed the charts in the 2010s on the strength of his hit duet with Bebe Rexha, "Me, Myself & I," from his major-label debut, 2014's These Things Happen. He repeated that success in 2017 with third album The Beautiful & Damned, which paired him with Halsey on the platinum "Him & I," and A$AP Rocky and Cardi B on the Top Four hit "No Limit." Born Gerald Earl Gillum in Oakland, California, G-Eazy launched his career while still in college at Loyola University in New Orleans, heading up a hip-hop crew named the Bay Boyz while dropping his solo debut, The Epidemic LP, in 2009. Two years later, his mixtape The Endless Summer landed with the hit redo of Dion's "Runaround Sue." In 2012 he released his second LP, Must Be Nice, hitting the road with Hoodie Allen and joining the Vans Warped Tour. In 2014 he returned with his first major-label release, These Things Happen (RCA). As his popularity grew in the following year, he embarked on an extensive international tour and recorded his fourth album. When It's Dark Out was released in late 2015 and included a hit duet with Bebe Rexha, "Me, Myself & I." Dark would go on to peak at number five on the Billboard 200 and top the R&B/Hip-Hop chart. In the summer of 2016, while on tour with Logic, YG, and Yo Gotti, Eazy appeared on Britney Spears' comeback single "Make Me," which entered the Top 20 of the Hot 100. "Some Kind of Drug," his single featuring Marc E. Bassy, arrived at the end of the year and would enter the singles charts in early 2017. At the beginning of the year, G-Eazy also teamed up with Carnage for the EP Step Brothers. By mid-year, he released the single "No Limit," which featured A$AP Rocky and Cardi B. The multi-platinum track climbed into the Top Five of the Hot 100, becoming his highest-charting single to date. This was followed by a second platinum chart hit, "Him & I," which featured his then-girlfriend Halsey. Both tracks were included on his third studio album, The Beautiful & Damned, which was released in December 2017. The double-disc set peaked at number three on the Billboard 200. In 2018 Eazy teamed up with Yo Gotti and YBN Nahmir for the single "1942," which appeared on the Uncle Drew soundtrack. Eazy's 2019 output included the EP B-Sides, the single "West Coast" featuring Blueface, and a bevy of features on tracks by Chris Brown, Carnage, and T-Pain. He closed the year with a second EP, Scary Nights, which recruited Moneybagg Yo, French Montana, Miguel, and others. In 2020, he found inspiration in quarantine during the COVID-19 pandemic, taking the opportunity to try new things and reflect. The results wound up on Everything's Strange Here, a drastic shift in style that set his rap braggadocio aside in favor of introspective indie alternative pop. Singing instead of rapping, he covered the Korgis and David Bowie, while also sampling Pixies. ~ David Jeffries & Neil Z. Yeung, Rovi