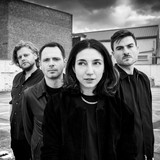 4 years after the release of their third album ‘Exhale’, the unbreakable foursome is ready to kick off the next chapter in their Intergalactic love story. After a long hiatus, some personal setbacks and a nasty encounter with Covid19, it took the band persistence and reinvigoration to get back on its feet. The future is bright though, Intergalactic Lovers have been cooking up an illuminated new album and they’re ready to hit the road once more. The new music sounds familiar and refreshing at the same time. More than ever before, the Lovers are aiming for the hips, and they’re introducing a bunch of electronic textures in the process. Their signature harmonies and Lara Chedraoui’s soothing vocals tie everything together. It’s fair to say this is a seamless transgression into new musical territory without losing touch of their indie pop legacy. Intergalactic Lovers are: Lara Chedraoui Maarten Huygens Raf De Mey Brendan Corbey