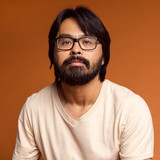 Bryan Estepa is an Australian singer-songwriter who has been part of the Australian independent music scene for over 20 years. Estepa has released 6 critically acclaimed studio albums and undertaken several succesful tours through Australia, Europe, USA, Japan and The Philippines. Bryan has once been labelled as one of 'Sydney's best kept secrets' and continues to create and release music through Lilystars Records. Estepa's new single 'Trick of the Light' is out now.