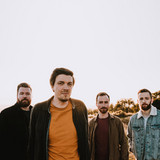 With favourable comparisons to the likes of Bear’s Den, Paper Kites, and Mumford & Sons, Speak, Brother have built a reputation for writing songs which speak directly to the heart and encourage vulnerability. It is, after all, what their name wants to inspire: conversation and connection. Following the launch of their debut album Young & Brave (2018) which took listeners on a journey through life, from the innocence and fearlessness of childhood to the inner and outer struggles that come from growing up — and growing old —, the band have shown an eagerness to evolve without compromising their ability to craft memorable melodies. Brought to life by the stories of struggle and the artworks sent in by fans, their previous release, “Meet Me In The Chaos”, explored how the simple act of sharing our stories helps us meet and connect with each other just as we are. Speak, Brother are set to return with a new single, “Even Though We Are Strangers”, on September 30th. Taking inspiration from a moment on a mountain during the Three Peak Challenge, which the band took on to raise money for a charity helping orphaned children, this song tells the story of the unexpected discovery of a deep, instinctive bond between humans; a secret fire that burns within us all despite our differences