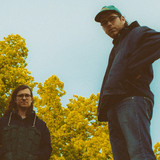 Myths of a Thistle

Featuring Myths of a Thistle

Indie-Folk duo Myths of a Thistle showcases the talents of singer MOAT and songwriter Eric Kroeber. The band is based in Halle (Saale), Germany and was founded in late 2018. Max and Eric have been around the same group of friends for several years, heard the stories but coincidentally did not meet until one night at a small venue where Eric played a small set of songs. They hit it off immediately and started supporting each other’s projects. Time passed,... positive emotions,... friendship,... blabla... MYTHS OF A THISTLE. Other projects: Max collaborates as MOAT with rap artist and old-time friend DISSY. Eric is singer and songwriter in the folk band Lightcap. “Popular love-tinged heart-worn folk compositions à la Nicolaus Copernicus” Creators of the hit singles “Baby I Was Born To Love You” and “Betty You’re Alone“