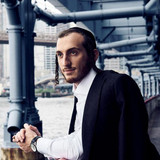 Shulem is the most recent rising star of the Jewish musical tradition that has been intertwined in the life, faith, and culture of the Jewish people. Whether it's prayers, psalms, or contemporary classics, this youthful Brooklyn tenor finds in music something rich and affirming, an endeavor that makes the soul soar and the spirit rise. In fact, Shulem feels music aspires to go beyond current historical context to illuminate what he sees as the perfect dream: when the world is at peace.

There are some voices that have to be heard – and Shulem’s is one of them. Marking the first time that a singer from the Hasidic community has been signed to major label, Shulem’s debut album, The Perfect Dream, will be released on Decca Gold, an imprint of Universal Music Group’s Verve Label Group. Produced by Jon Cohen, the album is an arresting arrival of a fresh voice -- new to many -- and yet already seasoned by years of performing for his congregation. His considerable vocal talents are supremely showcased in the two singles of the album, Les Miserables’ Bring Him Home and Jerusalem Of Gold. The release of The Perfect Dream extends Shulem’s reach further. A new world awaits and Shulem is excited about taking his music and message to greater heights. “This has always been a dream," he says. “What's going on now is truly humbling for me. I'm really leaving it up to God's hands, and we'll see how it goes.”