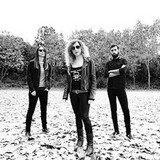 The Lizards are a power trio from Barcelona formed in 2007 that are characterized by their singable melodies and a strong sound influenced by bands such as Joan Jett, Motörhead, and Misfits. In 2011, they sign with Kaiowas Records, a subsidiary of Roadrunner Records and release their first album “Stalking the Prey.” Their second album “Road To Anywhere” is released in 2015 by the French label Adrenalin Fix Music. Both albums are recorded and produced at La Atlántida studio in Barcelona, with Edgar Beltri (current drummer of the band) as producer. They play shows for over ten years, including various tours in France and Germany, and they receive great acceptance from the public and the music press. They share stage with bands like Nashville Pussy (Resurrection Tour), Peter Pan Speedrock, The Last Vegas, Cavalera Conspiracy (Kaiowas Fest), The Hangmen, The Sisters of Mercy, Nelson Can (Low Festival), The Flaming Sideburns, The Dickies, The Avengers and many others. In 2018 they make a Route Resurrection Tour opening for Nashville Pussy across Spain and got very good reviews. In 2019 they join Black Izar management agency (El Drugs, L.A.M.O.D.A., Travellin 'Brothers). Their third album "Inside Your Head" is recorded at La Atlantida Estudio and released by the french label Adrenalin Fix. They are currently playing all over Spain and other countries. Line Up: Carla Santacreu: Vocals and guitar / Judith Jordan: Bass / Edgar Beltri: Drums