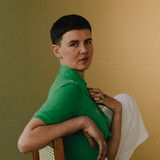 Naomi Keyte is a musician and songwriter from

Adelaide, Australia. Her songs are timeless and confessional, and dance between the alt-pop and folk genres. Her voice is gentle yet powerful and her lyrics explore the beauty in the everyday. “Naomi is one of the country's most ambitious and innovative writers with a unique and highly contemporary take on folk and popular song, and an instinct for weaving stories that are both intimate and expansive” - Max Savage In 2020, Keyte released her latest single ‘Travelling Woman’ and won Best Folk (People's Choice) at the 2020 South Australian Music Awards. This follows the 2017 release of her debut album ‘Melaleuca’, a long string of awards and nominations, and performances at WOMADelaide, OzAsia, Here’s to Now and The Basket Range Festival. ‘Greenhill’ is the latest offering from Keyte and heralds her second full length album, due for release in 2022.