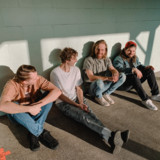 My Brothers And I

Featuring My Brothers And I

Oregon-based brothers-turned-bandmates, My Brothers And I, exude soul and emotion through their indie pop jams. The band, which consists of Wurgler brothers Erik (bass/vocals), David (lead vocals), and Scott (drums), along with childhood friend Jordan Roach (guitar), released their debut album "Don't Dream Alone" in 2015. The project has amassed over 13M streams, and has since led to premieres from Billboard and Ones to Watch. The group was also named one of KCRW's Artists to Know, and featured in Amazon’s “The Next” new artist program.   Since their debut, the band has released their "Heartbeat" EP, two remix EPs, and just released their second full-length album, "LOVE IS". Songs from across these projects have landed dozens of syncs in top TV programs including God Friended Me, Queen Sugar, Pretty Little Liars, and more.    Their various tours and festival appearances have also resulted in a number of high profile performances supporting the likes of St. Lucia, Misterwives, Allen Stone, Family of the Year, Saint Motel and others.