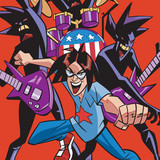 The man behind pop/punk superstar group Osaka Popstar, singer John Cafiero, started the band as a way to unite his love of music and cartoons, not to mention the fact that it gave him the opportunity to play with some of punk rock's (and his) heroes. With Marky Ramone (of the Ramones) and Richard Hell (the Voidoids) on drums, Jerry Only (the Misfits) on bass, and Dez Cadena (Black Flag) and Ivan Julian (Richard Hell & the Voidoids) on guitars, Osaka Popstar released their debut album, fittingly titled Osaka Popstar and the American Legends of Punk, in 2006. Cafiero also worked closely with cartoonists and animators John Pound, Mari-chan, and Joel Veitch in developing the album art and the two music videos included on the record. ~ Marisa Brown, Rovi