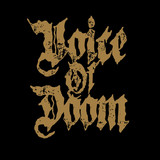 Voice of Doom is an American, Horror Hardcore band, originally from Hackensack, New Jersey, formed in 1986 by John Steele (Electric Frankenstein, Genöcide) & Frankie Fender (The Systum)   On the 25th anniversary of their original demise in 2014. VOD reemerged to record and release five new songs, along with a remastered version of their 1987 'Faith is Torn' EP which featured guest drummer London May of Samhain, and titled the whole thing “VOD III”. The new lineup featured original bassist Ricky Blades along with new drummer, Karl C. Scott and former Nasty Ammunition/Holeshot bandmate, Heim for lead vox. Shortly after recording, the original bassist decides obscurity is a better-suited activity for him, and the new drummer drives to his death in Northern California.   In 2015, the new VOD didn't have to look far for replacements. Steele turned to fellow 65's bandmate's Joe Pugsley and Ryan Struck to take over bass and drum duties. According to Steele, the band is "tighter, louder, and a little further from retirement age".