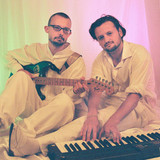 🕊🎀It’s your new favourite Boyband Brigade! 🎀🕊 Booking: luca@k4bookings.com Brigade is without a doubt the most idiosyncratic feature of the Keller Family’s musical universe. They themselves called it Potato Disco, so the tone is set. Held together by cigarrettes, gas-station snacks and an undying love for Gigi D‘Agostino, Brigade is back on the road, hitting every dog and pony show from Sisyphos to Fusion Festival and all over Europe. Chances are if you are out this summer, and catch a set where there‘s two guys elevating behind drum machines whilst playing solos on a golden keytar, it‘s them. Don‘t sleep on this duo and dance the shuffle like the true Brandenburg kartoffel you are.