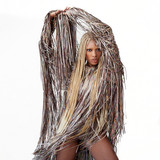 Embracing music as her destined calling at a single digit age opened MAAD’s eyes to her own limitless potential as an artist, setting her on a lifelong path of self-discovery, determination and relentless drive. The New York-born, New Jersey-raised artist became enamored by the art of self-expression growing up, finding inspiration in her mother’s charismatic work as a stylist and her father’s talents as a musician. Initially, after finishing school, MAAD focused on her work as a songwriter, an entry point to the industry that culminated in working behind-the-scenes with an array of esteemed musicians. Though songwriting helped strengthen her pen game, MAAD found herself eager to seek out other avenues to build her artistry, develop her own voice and independently support her creative endeavors. While working on original music and finding her footing, DJing emerged as an organic next step, leading her to garner a notable client list featuring the likes of Tiffany & Co., Cartier, Instagram, Samsung and Spotify at Cannes Lion where she opened up for Nas, Swizz Beatz, Bebe Rexa and Tove Lo. In tandem with her work as a DJ, MAAD remained steadfast in her journey to establish herself as a singer-songwriter, releasing 2017’s ​Lè Funk ​and 2018’s ​Technicolor​. MAAD is currently readying her next release, due out June 2020. In addition to polishing her upcoming project, MAAD can be found accompanying Luke James on tour for select dates. https://shesmaad.com/