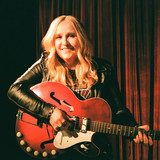 Melissa Etheridge released her self-titled debut album in 1988, which led to an appearance on the 1989 Grammy Awards show. Her popularity grew with "Bring Me Some Water," "No Souvenirs" and "Ain't It Heavy," for which she won a Grammy in 1992. Etheridge hit her commercial & artistic stride with her fourth album, Yes I Am (1993), featuring the massive hits, "I'm the Only One" and "Come to My Window” (which brought Etheridge her second Grammy for Best Female Rock Performance). In 1995, Etheridge issued her highest charting album, Your Little Secret, which had the hit, "I Want to Come Over." She received the Songwriter of the Year honor at the ASCAP Pop Awards in 1996. In February 2007, Melissa Etheridge celebrated a career milestone, winning the “Best Song” category at the Academy Awards for “I Need to Wake Up,” written for the documentary An Inconvenient Truth. In October 2004, Etheridge was diagnosed with breast cancer, a health battle that she won. In 2016 Etheridge released Memphis Rock & Soul, her first album since 2014’s This Is M.E. She followed that up with the release of The Medicine Show in April, 2019. In June 2020 Melissa launched Etheridge TV, an independent channel built on the Maestro platform. Etheridge goes live five days a week for her fans, each day offering something different. That same month Melissa also announced the launch of The Etheridge Foundation, raising money to support healthy new research into the causes and effects of opioid addiction.