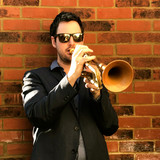 Duncan Fraser is an award winning Jazz Trumpeter/Composer/Arranger based in the UK and working in and around London. Duncan has been active as a professional Jazz musician for over 10 years now, previously with a Big Band album to his name, a growing reputation as an Arranger & Orchestrator, two runs in London's West End with 'The Blues Brothers' under his belt as well as having performed hundreds of gigs with many bands, artists & touring shows. 2021 will see Duncan release his newest album 'Soundscapes of Manhattan' with his septet. The Album features tracks inspired by some of Duncan's trips to New York City, where he presents each tune to encapsulate the spirit and energy of its titled landmark, accompanied by 6 of his good friends and accomplished musicians on the London Jazz scene. Make sure to follow to hear each of the 3 singles scheduled for release this summer with the full Album dropping at the start of Autumn.