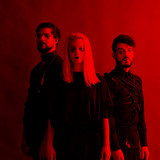 Himalayan Dalai Lama are representatives of instrumental electronic music, which in their case is defined by dream synthesizer surfaces and dance beats. The first great experience and formation of the project took place on the European tour 2015, where they played 11 concerts in Austria, Germany, Poland, and the last stop was London in the cult club The Old Blue Last. They used the experience from the first tour to create their debut album, which was released in 2016 under the name LAMA, and earned them an nomination for the Anděl Award. In the same year, they won the Radio Wave Czeching export competition, presented themselves for the first time at Colors of Ostrava and released EP Space under the auspices of the aforementioned Radio Wave. The victory in Czeching ensured them a performance at the prestigious Dutch showcase festival Eurosonic Noorderslag. The second LP Orange Colored Rose Leaves was released in 2018, when Himalayan Dalai Lama was already a fixture of the Czech electronic scene, and they have had a successful Slovak tour with the band Fallgrapp. Terezie Kovalová, who also participates in the next EP Hyper Real, as well as the last LP Isolated Bonds, appears as a guest on the album Orange Colored Rose Leaves for the first time. The pair works closely with the Brno National Theater, which chose the song Hayashi from the album Isolated Bonds as part of their new brand video for 2021.