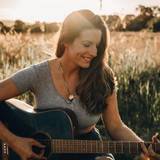 the age of six, followed by vocal lessons, drums and guitar in high school. She grew up with Christian and Pop influences before being embraced by Country music at song-writing retreat in 2015 with Allan Caswell , Lachlan Bryan And The Wildes, Karl Broadie & Aleyce Simmonds . Her vocal inspirations and tone could be described as a mix of, Shania Twain, Amy Winehouse, Beyonce and Sandi Thom. In October 2020 Rae won a songwriting competition giving her $10,000 value to record the song and produce a music video with JMC College in Brisbane. This song will be released in early 2021. She has been selected as a finalist for the Country Music on Keppel Festival talent competition which will be held in November 2020. Rae Leigh has launched and hosts her own podcast ‘Songwriter Trysts’ which is a safe space for artists to share their stories and discuss the art of song writing and emotions, all the great things that build amazing songs. This is to validate, educate and encourage song writing and connections within the song-writing community. The 100 guests that have featured on the show have ranged from international to local talent, with the podcast in high demand there is already a large backlog of new applications for future episodes.