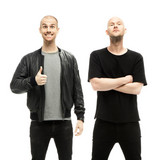 Olle Cornéer and Stefan Engblom are a Swedish DJ duo from Stockholm, known by the collective name Dada Life. The duo was formed in 2006. They have released two albums, a number of singles and remixes and one compilation. The duo had early chart success in Belgium and the Netherlands, while their second album The Rules of Dada reached the Billboard 200. They are known for their humour during their live performances, while their name is a homage to the absurdist movement of the early twentieth century.