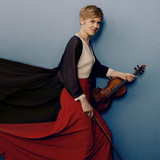 Violinist Isabelle Faust emerged in the 1990s and has become one of the most versatile players on the scene, playing both modern and historical instruments, and with a large repertory stretching from the Baroque to new works. In the 2010s she was especially noted for fresh interpretations of violin-and-piano repertory with her duet partner, Alexander Melnikov. Faust was born in Esslingen, near Stuttgart, then in West Germany, in 1972. She accompanied her father to his violin lessons when she was five, and while the father's talents were ordinary, teachers noticed that the daughter quickly mastered whatever challenges she was given. A family string quartet (her brother Boris Faust is a noted violist) as well as lessons with Denes Zsigmondy and Christoph Poppen honed her skills. After winning first prize at the International Leopold Mozart Competition in Augsburg in 1987, Faust moved to Paris for nine years to gain experience in new contexts rather than enrolling in a conservatory. Musing that her French first name might have led people to believe she was French, she began to find major engagements, making her U.S. debut in 1995 with the Utah Symphony and appearing with many of Germany's top orchestras including the Hamburg Philharmonic under the baton of Yehudi Menuhin. In the later part of her career she has performed with top orchestras internationally. In 1997 Faust released her first album, a set of Bartók violin sonatas recorded with pianist Ewa Kupiec; the album earned a Gramophone magazine award for Young Artist of the Year, and further recordings earned other major prizes including the prestigious Diapason d'Or de l'Année for a cycle of Bach's Sonatas and Partitas for solo violin in 2010. Most of her albums have been released on the Harmonia Mundi label. In the early 2000s Faust began performing and recording violin sonata repertory with Russian pianist Alexander Melnikov; their historically informed recording of Mozart violin sonatas, released on Harmonia Mundi in 2018, earned wide critical acclaim. She has also issued a set of Mozart violin concertos with the historical performance group Il Giardino Armonico. Faust has been on the faculty of Berlin's University of the Arts since 2004.