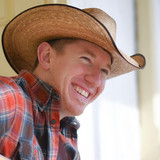 Like many artists, Ryan Jewel was drawn to music at a young age. When he got his first guitar, there was no turning back. By high school, Ryan started playing with the idea of becoming a professional musician. By his sophomore year at Clemson University, Ryan and his fellow bandmate, Andrew Beam, were burning up every bar, club, sorority, and fraternity party they were able to. A native of Front Royal, Virginia, the country music singer/songwriter released his first EP "Up on the Drive" in 2016. This EP helped him gain traction with his music career around his hometown, the Shenandoah Valley, and further. Along with his EP, Ryan was a runner-up in the 2015 Texaco Country Showdown, a nationwide talent search, which solidified Ryan's calling for a music career. Ryan has had the privilege of being the opening act for some major country artist's such as Marty Stuart and Lauren Alaina. He has also shared the stage with fellow Nashville artists, and Clemson buddies, Cody Webb and Doug McCormick.  When Ryan moved to Nashville in 2016, he hit the ground running; signing a management deal with Harmony Music Group Mgt just two weeks after moving to town. "If we didn't sign him, someone would've jumped all over him as soon as he opened his mouth around town and started singing" - (Fred Conley) He started singing demo's for many established writers around town and soon after, began writing with many of those same writer's.  Ryan is looking to release his second EP in March 2019.