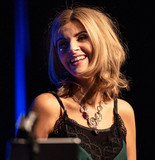 Donna Taggart is an Irish singer-songwriter in the Folk, Americana genre. Combining hauntingly beautiful vocals with a unique and sensitive interpretation of songs, as well as a strong audience connection, Donna has been touted as the new Eva Cassidy and widely compared to iconic singers Alison Krauss, Sinead O’Connor and Norah Jones. Donna is well known for her impassioned and moving ballads. Her distinctively sensitive, yet powerful voice entrances listeners. Donna's early career influenced her song-writing as she witnessed first-hand the darker side of life while working in a refuge centre for women and children affected by domestic violence. Donna then worked as a youth worker for young people at risk of homelessness and then as a behavioural therapist to children with autism. Her caring nature and dedication to helping others, has shaped the artist she is today. Global recognition of Donna’s talent beckoned in 2016 with the release of her hit song Jealous of the Angels taken from her second album Celtic Lady Volume 2, propelling her to No. 42 in the US iTunes charts, No. 1 in the iTunes Easy Listening charts spread across 8 countries and No. 1 in the US Billboard World Album Catalogue for a full 3 weeks. The song currently sits at an impressive and ever-increasing 150 million hits across social media platforms. Donna’s remarkable success has seen a huge surge in demand for her live performances and she has performed several sell-out tours across UK and Ireland.