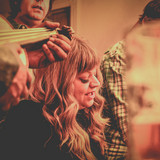 Christina Alessi & the Toll Collectors are a quintet led by a seasoned storyteller who sings from the heart. They counted off their first song in late 2014 in a former industrial building on the Jersey side of the Holland Tunnel. Their music is as real as it gets. And how do they sound? (Ah, every band’s favorite question.) Like rain on the windshield during a late-night drive. Or a jukebox sing-along in a neighborhood dive. A bit of country, rock, and soul. But something else, too. Heartbroken, yet defiant. Down, but never out. Resolute. It might help to mention that there’s violin and mandolin, a remarkable lead vocalist who thrives on connecting with audiences large and small, and four more singers who pile on the harmonies. I guess you could call it Americana music. But why not just listen? Christina Alessi • lead vocals, acoustic guitar Jonathan Andrew • bass guitar, vocals Josh Bicknell • drums, vocals Sean-David Cunningham • violin, vocals Maribyrd • mandolin, vocals