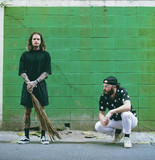 Cherub began in 2010 at Middle Tennessee State University. The two met as Jason was playing around town with local bands and Jordan was crafting what would become known as their first album, Man of the Hour. A few years later, it was the song Doses & Mimosas that caught the attention of the public eye. Their 4-year major label run brought their fans two LP’s, Year of the Caprese and Bleed Gold, Piss Excellence, while also sending them around the world playing festivals such as Lollapalooza, Bonnaroo, Glastonbury, Outside Lands, Osheaga, Summer Camp, Summer Sonic, and headlining 4 US tours. Now, a gold record and 130 million Spotify streams later, the bond between them remains “unfuckwithable,” as they construct their newest batch of genre-defying anthems.   The past couple years have brought new music, with a series of singles including All In, Dancin' Shoes, Body Language, Want That, and So What? as well as their new EP Gummo Season.

In 2020, the band released a collection of B-sides from previous recording sessions, handpicked by their good friend DJ BJ, lovingly titled DJ BJ's Faves. There’s no doubt that the latest Cherub efforts will win over their existing audience and draw new listeners to their established brand of debauchery. From your ears to your heart, like searching for room on their bodies for a new tattoo, they’ll find a way.