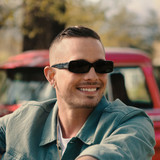 With four singles in a row of platinum, seven gold awards, an MTV EMA as "Best Swiss Act", three Swiss Music Awards in a row with "Adiós" (2019), "Punto" (2020) and (Amame) (2021) in the "Best Hit" category, several Top 10 Airplay Charts and the nomination for "Best Urban Act of the Year" at the LUKAS Awards, Loco Escrito is the biggest hit of the Swiss music scene in recent years. In February 2020, Loco Escrito also appeared in the first Swiss edition of "Sing meinen Song" and continued to impress with its charm and honesty. But the way up was difficult: the loss of his friend, the serious motorcycle accident and the then pregnant girlfriend - Loco went into a crisis, but never gave up. "Perder para ganar" sings in "Estoy Bien". "Today I'm doing well, I've solved my problems, I've sold over 100,000 singles in a year and a half," says Loco, and he knows that it takes a lot of energy to make his dreams come true. Loco Escrito was born as Nicolas Herzig 30 years ago in Medellin, Colombia, arrived in Switzerland at the age of six months and grew up in Wetzikon ZH. In elementary school he tried to play the drums, and at the age of ten he started writing and rapping Spanish lyrics. "I speak German and Spanish equally, but I can't do either one perfectly," laughs Nicolas. "Spanish is the language of my heart in which I can express my feelings.” For years, he has been supported by the same management and production team, which firmly believes in the talent of Loco Escrito