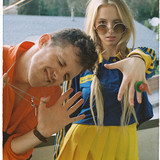 Loote, made up of Jackson Foote and Emma Lov, were first united by a professor at SUNY Purchase College. Since then these two kindred spirits have quietly positioned themselves for pop ubiquity. The group’s 2018 debut EP, single., gathered nearly 150 million cumulative streams in under a year. As they averaged over 8 million monthly listeners on Spotify, “High Without Your Love” and “Your Side of the Bed” both leapt past the 40 million-mark. Jackson co-produced and co-wrote Zara Larsson’s “Ruin My Life” which recently was certified gold.

Additionally, they collaborated with David Guetta and Brooks on the 2019 smash “Better When You’re Gone.” “In the next chapter, we set out to do music that’s a little bit moodier and darker,” explains Jackson. “I’m really into R&B. Even though it’s super soulful, there’s a dark element. Emma loves emo and classic rock. We went back to our roots that pre-dated writing pop songs.” “It’s a more evolved phase of our lives,” agrees Emma. “We’re always going to grow and evolve.” The duo laid the groundwork for such a diverse and dynamic style by penning songs and remixing some of the world’s most recognizable stars. Not only did they co-write Cheat Codes’ multiplatinum smash “No Promises” [feat. Demi Lovato], but they also officially remixed tunes by Shawn Mendes and Mike Posner, to name a few. Now, their unfiltered honesty and vision unfolds like never before on their 2019 EP and first full-length album.