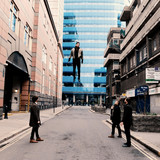 Electric Litany is a London-based four piece whose music incorporates sounds of post rock, synthpop, neoclassical, electronica and experimental soundscapes. They have released three albums as well as the “Love” EP (2016) and are set to release a new EP later this year (2021). Founding members Alexandros Miaris and Richard Simic formed the band in 2007. In their formative years Electric Litany lived and rehearsed in abandoned buildings across East London including Leyton Town Hall and The Fallen Angel in Walthamstow. In 2009 they recorded their debut album “How To Be A Child and Win The War” (released 2010 on Inner Ear) in a church in Neasden North London with producer George Botis. In 2011 the band performed extensively including supporting Interpol on their European tour and numerous European festival appearances. In 2012/2013 the band recorded their second album “Enduring Days You Will Overcome” with music legend Alan Parsons as co-producer. Response to the album was hugely positive and gained the band international recognition. In July 2015 Electric Litany were invited to perform in Sytagma square in front of tens of thousands in Athens, Greece during the protest against austerity. The next day they performed on the main stage at Rockwave festival alongside The Prodigy and Black Rebel Motorcycle Club. In 2019 Electric Litany released “Under A Common Sky”, which features tracks ‘Sealight’ and ‘Refugee’, both of which received awards for their music videos.