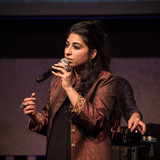 The music of Arooj Aftab floats within several liminal spaces you might not have imagined—between New Age and classical minimalism, between Sufi devotional poetry and electronic trance, between singer-songwriter structure and states of pure being. Raised in Lahore, Pakistan, to a family that loved music and indulged her budding interests, Aftab had a natural aptitude, absorbing the lessons of imported pop, south asian classical music, and urdu poetry set to sound. In Pakistan, she recorded a humble and beautiful acoustic cover of “Hallelujah” that became a viral treasure. After moving to New England to attend the Berklee College of Music, though, her audio universe suddenly opened up, revealing abstract jazz and modern composition that would allow her to stretch her sense of song and magnificent voice into totally immersive states of being. On her first two records, Aftab created singular, seamless worlds: For 2015’s Bird Under Water, she stretched her melismatic voice over gentle acoustic guitar, fluttering winds, and astral electronics that shimmer like gauze. And on 2018’s Siren Islands, that voice glows like the rising sun, radiating within digital frameworks that recall the colorful keyboard patterns of Terry Riley’s all-night flights or Grouper’s slowly circulating hazes. Aftab is listed as NPR's 200 Greatest Songs by 21st Century Women, and The New York Time's 25 Best Classical Songs of 2018. Aftab also has a 2020 Academy Award composing music for film.