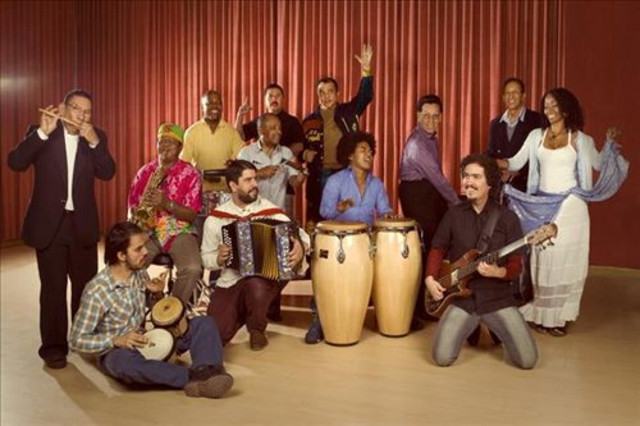 Ondatropica is a wide-ranging musical collaboration co-led by Mario Galeano (Frente Cumbiero, Los Pirañas) and Will "Quantic" Holland. Depending on the recording session or concert, the ensemble can number anywhere from 10 to 42 members. The pair met when Galeano traveled from his home in Bogota to meet Quantic in a record store in Santiago de Cali, where he was living at the time. After the shopping session, the pair went to a cafe to discuss making music together. A year later, they had a three-week recording session at the legendary Discos Fuentes in Medellin, Colombia. Their self-titled album on Miles Cleret's Soundway label showcased a magical sound collision ("onda" means sound wave) that showcased everything from cumbia, salsa, and Afro-Caribbean gaita and ska, to hip-hop, dub, and funk. A ten-piece version of that band toured throughout America and Europe playing the Discos Fuentes classic repertoire. That same year, Inversiones Cronos released the Los Irreales Mixtape, co-sponsored by British Council, Sonido del Valle, Radio Nacional of Colombia, and Movistar. A year later, Ondatropica issued an EP with a cover of Fela Kuti's "Chop 'n' Quench," along with two remixes. Quantic moved back to New York in 2014, but reunited with Galeano the following year in Bogota. They recruited another large cast to commence work on a second album. The premise was to record in Bogota and Old Providence Island (Isla de Providencia) -- two contrasting locations united by their reputations as musically creative hubs. Urban Bogota had an active musical and artistic underground that pursued a punky, D.I.Y. mentality, while Providence reinterpreted and updated the Colombian national identity through regional folklore and active dancehall and reggae scenes. According to the band's founders, the decision to record in Providence Island was not random. Originally settled by the British and later becoming part of the Colombian republic, the island has a heady mix of African, English, and Spanish cultural heritage and is therefore a perfect example of the Caribbean cultural experiment. The band's goal was to explore the common ground in wildly divergent musical styles and the ways in which they synthesized. Between the two locations, a total of 35 musicians from very different backgrounds, musical styles, and age groups were recorded. The finished album, Baile Bucanero, was issued by Soundway in the spring of 2017. ~ Thom Jurek, Rovi