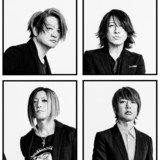 Glay rank among Japan's most successful acts, having a knack for effective pop/rock songs that allowed the band to sell 35 million records in less than a decade-and-a-half. Although they were associated with the "visual kei" movement, especially at the beginning of their career, they also boasted their own type of extravaganza -- such as filming promo videos in Iceland and London and embracing their status as glam rock icons in their native Japan. Debuting in the '90s with Hail to Diamond, they issued over a dozen official albums, dominating the Japanese charts with a string of chart-topping efforts, including the top-selling Pure Soul (1998) and Heavy Gauge (1999). Into the 21st century, they continued to rule the arenas and airwaves, with a half-dozen additional number one albums. They closed the 2010s with their 15th set, No Democracy. Glay were launched by Takuro (guitar) and Teru (vocals), who had been friends since elementary school and were living on the northern island of Hokkaido. The name of the band is supposed to mean "gray," although it remains unclear whether the misspelling was accidental -- which seems possible, seeing that Glay started out when the members were still in high school. After picking another guitarist, Hisashi, from the short-lived local punk rock sensation Ari, Glay managed to make a name in their hometown, but when they moved to Tokyo after graduation, they found out that the road to fame is never smooth -- sometimes Glay even had to play gigs with no audience at all. Things began to change in 1991, when they acquired bassist Jiro from one of Tokyo's underground bands. His inclusion cemented a lineup that hasn't changed since (although the band plays with session drummers), but it still took two years of polishing their sound before Glay scored a lucky ticket -- which happened in 1993 when they were signed by the indie label run by Yoshiki Hayashi, the drummer of Japanese metal gods X-Japan. Their debut album, Hail to Diamond, was released in 1994. It's considered an indie album, but Glay didn't stay indie for long, beginning a steady rise to stardom: their second disc, Speed Pop, was released on a major label (Victor); their third album, Beat Out! (1996), was their first to top the Oricon charts; its follow-up, Beloved, released during the same year, was the first to sell more a million units, and "However" was their first number one single. These achievements were repeated more than once during Glay's history, and their best-of compilation Review (1997) sold more than four million copies, making it the biggest-selling Japanese record at the time. In the heyday of Glay's popularity in the mid- to late '90s, the band's fans even crashed the phone service nationwide as they attempted to book tickets for a 1999 tour that also happened to include the first of the Glay Expos -- a megalomaniac's delight of a show that the band has been repeating on a regular basis ever since. The first Expo, held in Makuharu, gathered an audience of 200,000, thus ranking as the biggest live gig in the nation's history. Glay's career took a dip in early 2000s, at least in part due to their music: the band added R&B and reggae on One Love (2001); included rap, gospel, and traditional music on Unity Roots & Family, Away (2002); and later collaborated with the boy band Exile on the single "Scream" (2005). The fans didn't react well to these experiments. Although Glay still managed to top the charts, none of the records from that period managed to outsell the level of one million units. That didn't affect Glay's reputation as a live band, however, as all their shows sold out, including a concert in Beijing with 35,000 in attendance, their first big foreign event. It was big by all accounts, ranking as the most expensive concert in China's history and scoring the band a meeting with Jiang Zemin, the then-president of the country. Staying true to the "big"' approach, in 2003 Glay transferred from Pony Canyon to Toshiba EMI, with the four-billion-yen contract ($34 million at the time) becoming the most expensive in Japanese history. A huge contract and foreign success didn't prevent the band from going on a year-and-a-half hiatus in 2005-2006. The members worked on side projects, one of which, the Predators, involved members of Straightener and the Pillows, and the other, Rally, included members of the Mad Capsule Markets and Thee Michelle Gun Elephant. Glay also had a falling out with their promotional agency, reportedly a dispute over money, and the group even thought of disbanding. Luckily, they thought better of it and, solving their problems, went back to their rock & roll roots with a three-day Budokan marathon; collaboration with another J-rock star, Kyosuke Himuro, ex-vocalist of Boøwy; and a new album, Love Is Beautiful (2007), their seventh number one. Into the 2010s, Glay continued to top the Oricon charts, even as sales decreased with the changing trends in music consumption. Additional chart-toppers Glay (2010), Justice (2013), and Summerdelics (2017) further cemented their veteran icon status. They closed the decade with 15th album, No Democracy, which arrived in 2019. ~ Alexey Eremenko, Rovi