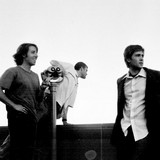 By the following spring, Near By Music released Start your Own Country, an EP that featured duets between Inganni and Sorensen.