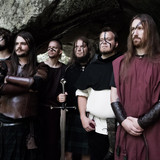 Shadows arise over the continent of Nirthalion as the dark god Thyorvin awakes from his slumber. Only the young Tirdun, who grew up among the dwarves, can save the land. But numerous minions of the fallen god are waiting for the son of the depraved hero Malandor, who was succumbed to the hold of the mysterious Banshee. Six young bards have set forth to stop the evil in Nirthalion and to stand by Tirdun's side. These six bards are Svarta Faran, a Folk Metal band from Nuremberg, Germany founded in 2009. After several years with line-up changes, a solid line-up was found in 2014. Patrick Heuer ("Met") is the only founding member of the band who is still active. With Michael Hauck ("Michi"), Jannik Heuer, Matthias Oksman ("Lörns"), Mathias Rosenberger ("Rosi") and Florian Wojtenek ("Flo") new combatants were found and so the band can again ride into battle against the evil hordes who try to devastate Nirthalion. With a mixture of fantastic lyrics, melodic folk sounds, epic orchestrations and brute metal, Svarta Faran take the listener on an imaginative journey through their own world. Musical role models are bands like Ensiferum, Wintersun, Equilibrium and Eluveitie. The story behind the lyrics, which takes place in a fantasy world called Nirthalion, was written by Patrick Heuer, the songwriter of the band. Homepage: http://www.svarta-faran.de